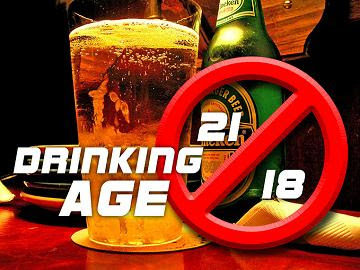 Responsibility, maturity, and righteous judgement. Considerations of lowering the drinking age sets all previous attributes to risk. Many 18 year-olds argue their age prohibits drinking although at the same age, they are allowed to vote, be tried as an adult, and serve their country. However, these privileges are far different from the effects of drinking while many teenagers choose to ignore it. Voting and having the opportunity to serve in the military are forms of contribution to the government. These opportunities require high maturity and wise levels of judgement, as does drinking. However, being served alcohol is a privilege and should be at an older age. Someone under the influence not only puts themselves at risk, but also the lives of others. An older age brings a higher level of maturity and better judgement as to whether or not the person can handle the privilege. The drinking age should not be lowered.
Posted by Rory Sanford