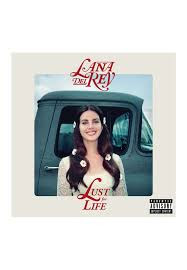 What are your thoughts on “Lust for Life”, and no not the classic film about Vincent Van Gogh or that one Drake song on his new album? I’m talking about Lana Del Rey’s fifth consecutive studio album “Lust for Life” which will soon no longer be her most recent album with the anticipated release of her sixth album “Norman ******* Rockwell” and can I say, that’s hands down the best album title I’ve ever had the opportunity to read. Singer/songwriter Lana Del Rey is not your average artist. Her genre is truly interesting since she likes to experiment with different genres, however, she maintained a specific style with each called sadcore, a style that became popularized with her. “Lust for Life” is considered alternative pop, specifically alternative dream pop and it was released on July 21, 2017. It was also nominated for a Grammy for the best pop vocal album.
Arguably one of her longest and happiest albums, “Lust for life” is the first album she smiles on. From her song “Love” to “13 beaches”, the styles of each song are truly unique and unlike one another. The most popular songs on this album include “Lust for Life” in which she joined forces with R&B singer The weekend to sing the story of a tragic romance, “Love” in which she sings the wonders and beauty of love, “Summer Bummer” in which she joined forces with rappers A$AP Rocky and Playboi Carti to create a trip-hop summer bop, and “Groupie Love” which is another song that features A$AP Rocky and it tells the story of love and fame through a dreamy pop way. “Beautiful people, beautiful problems” features rock singer Stevie Nicks and is written on the topic of privileged lives and problems associated with them. It also has psychedelic touches, piano instrumentals, and some soft rock influence especially caused by the feature of Stevie Nicks who is known as the lead singer of the soft rock band Fleetwood Mac. However, her song “13 Beaches” pulls audio from an old film throughout the song, it also has violin and piano instrumentals. The song is about the struggles of being famous and the selfishness some people associate with celebrities needing space away from their fans. In the song “Tomorrow never came”, she collaborates with Sean Lennon, the son of Beatles member John Lennon and is stow yet it has elements of the Beatles style, especially through Sean Lennon’s vocals. Lennon sings in the style of the Beatles. The vocals are backed by an acoustic guitar, a bass, and a sad storyline of longing for a loved one. Her song “Get free” is in a 60s girl group style and the title speaks for itself. All the songs, in general, have such distinct sounds.
The album itself is beautiful. My personal favorite songs are “Beautiful people, beautiful problems” mostly because of my love of Stevie Nicks, “13 beaches” primarily because of the vintage vibes, and “heroin”, a song that gives me goosebumps every time I listen to it. Although Del Rey moves slightly away from her style, she delivers something unique from all her other albums. Nearly all the songs beautiful meanings and excellent songwriting to back them up. The Instrumentals create a vibe for each song. I really enjoyed the vintage 60s style of “Get free” because of my appreciation for that type of music. Her collaborations can certainly be appreciated, especially the ones from Stevie Nicks and Sean Lennon.
On the other hand, it’s not hard to spot a negative aspect of this album. From the weird trap beats on a few songs, political motivation in a few songs, and the fact that Stevie Nicks and Playboi Carti can be on the same album is just disappointing. In my opinion, it wasn’t her best album, but it wasn’t her worst either. The trap beats on songs such as “In my feelings” (no, not the Drake song) and “Summer Bummer” was especially disappointing because of her retro style. The political motivation behind “God bless America”, in my opinion, wasn’t completely necessary but, she didn’t mention the election or any of that, she was truly just listing off the problems with America. Although I do enjoy that song and I agree with it, plus she has every right to express her opinion. The collaboration with Playboi Carti was absurd and should have been discarded and no, it’s not because he is a rapper, it’s because he puts a bad reputation on the music industry. Her collaboration with A$AP Rocky was much appreciated because it added to the versatility of the album and they have been friends for years.
In my opinion, this album is indeed worth your time and money. Although a few of the songs had problems, the rest are truly magnificent. The topics are relatable, to some degree, and the style is unlike anything you’ve ever heard before. I would rate this album at a solid 4.5. The trap beats and weird collabs lost her points.
Posted by Sarah Schmidt