Review: Fantastic Beasts and Where To Find Them 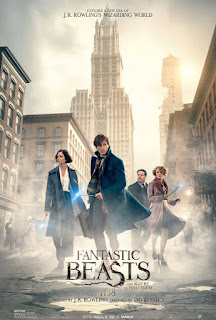 "Fantastic Beasts and Where To Find Them" keeps you on the edge of your seat the entire time. You are never dreading a moment while watching the movie.

David Yates' movie is rated PG-13 and was released November 18, 2016. It is in the genre of adventure, family, and fantasy. The film was expected to be huge, and with that assumption, it made $814 million. Eddie Redmayne (Newt Scamander), Ezra Miller (Credence Barebone), and Dan Fogler (Jacob Kowalski) are some of the lead actors for this film and really make everything come together.

David Yates' film, "Fantastic Beasts And Where To Find Them", is about Newt Scamander coming to New York to do some research. He runs into some trouble that leads to an adventure that leads to something far more sinister and dangerous for the wizarding and No-Maj worlds.

This movie is great is many aspects including the characters, acting, settings, special effects, and the plot. The characters were very distinct from one another and the way they spoke and acted showed what kind of person they were as if you could meet them in real life. The acting and in this film really shows to personalities of each character and the connections they have with the other characters. The special effects in this film are phenomenal, they show great detail for each magical creature and it seems as if you could see these creatures in real life.

Each setting within the film was very detailed and stunning. Every place that scene took part in was eye-catching and it made sense for the scene that was happening. The plot of this movie was very well put together, it flowed very easily and every scene of the movie made me feel what the actor was saying or whatever was going on. I felt as if I were there in the situation. Although there are so many things to look forward to in the movie one scene towards the end of the movie really upset me because it honestly seemed unneeded and it really didn’t make sense as to why they did this, especially at the very end of the movie.

This movie is worth watching because it is put together very well and the movie, in general, is amazing. The sound effects, the characters, the creatures, etc. Everything has its own important role in the movie and the movie is overall pleasing to the eyes and the ears.

10 Fantastic Beasts out of 10
Posted by Ashton Miller