Why Are Gas Prices Decreasing? 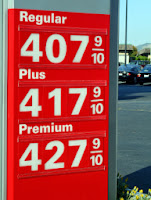 Over the past year, gas prices have been decreasing.

Oil prices are falling because of supply & demand. Demand has slowed down, but since 2008, the U.S has increased our supply by 50%.

Oil production in states like Texas & North Dakota has doubled in the last six years. From 2008 to 2013 the oil & gas extraction industry created more than 100,000 jobs while the overall market shrank by 970,000.

The gas prices are the lowest they have been in five years.

I personally think the gas prices should stay low; I don’t think anyone should spend over $3.00 for a gallon of gas.
Posted by Shark Attack