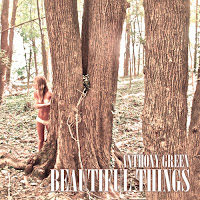 by Jonathan Matthias
The sophomore release of Circa Survive’s lead vocalist, Anthony Green, has a lot of people talking. ‘Beautiful Things’ is a big step in Green’s solo career, supplying a very satisfying record. Like Avalon, the previous record, Green sings his depressing, catchy songs accompanied by fellow musicians from the Good Old War. The album explores a more polished folky-bluegrass style while staying true to the old sound people loved. There is a sound that everyone can enjoy inside.

The lyrical content and vocal ranges are where he shines the brightest. The album experiments much more than Avalon, and themes itself around the birth of Green's first child, James. However, just like his older songs, he has a bitter tone while delivering some very poignant lyrics; all while in a catchy, indie format. His unique voice and style of songwriting grabs you and doesn’t let go. He gives a lot for a listener to enjoy throughout the entire record.

The first single, ‘Big Mistake’ was released back in July of 2011 which poked a lot of interest in fans who had been wondering if he weas returning to his solo work. With 13 brand new tracks, Green doesn’t disappoint. The newest and biggest single ‘Get Yours While You Can’ sticks out on the record along with ‘Can’t Have It All At Once’ and ‘Just to Feel Alive’ for having a heavier sound than the rest of his work. This work is debatably his best yet with songs like ‘The Blood Song’ that will having you humming the melody and the infectious beat of ‘How It Goes’.
Green’s solo career just started out as a handful of songs he had written and with encouragement from his bandmates has turned into an album. Now he has defined himself firmly in the music business having released over 30 songs within two albums over the past few years. Signed to the same label as 3OH!3 and The Downtown Fiction he has accomplished a lot for a solo artist within progressive rock. Be sure to catch him on tour this month and to buy his new album ‘Beautiful Things’ either in stores or online January 17th.
Posted by Shark Attack