Sharks leave the water and hit the mats 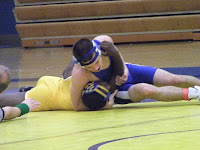 by Chelsea Murray
With only a little over a month of competing so far, the St. James wrestling team is blowing all other teams out of the water. The boys on the team have experienced win after win and are still getting even better. They especially did phenomenal in the annual wrestling tournament.

This past weekend, the team competed in the Marion Duals tournament. The boys held onto their number four ranking with five wins. In the first round, the Sharks dominated Waccamaw with a score of 75-6. They stayed strong in the second round and beat Carolina Forest 63-9.

The Sharks faced their rivals, the Socastee Braves, and ended the match with a score of 42-30. “We were beating Socastee 42-0 when I decided to forfeit the rest of our matches before we had to wrestle the defending state champions of Hannahan.” said Coach Anderson. Hannahan lost to St. James, 69-12. Finally, St. James and Aynor hit the mat. Aynor suffered a loss of 46-27.

Now Anderson and the boys are preparing for the next big match. The varsity wrestling team will compete against North Myrtle Beach High School on Friday, December 9th. If they compete just like they did in the tournament, the Sharks will be sure to win this next match. Come out to NMBH and support our sharks.
Posted by Shark Attack