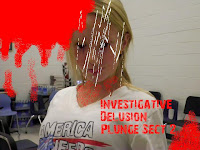 by Cody Dean
As me and my heterosexual partner Matt Martel, here by addressed as “Ice” or “Ice Man” or “The Ice Cream Man” or “Ice Ice Baby” or “Vanilla Ice” or “The Ice-road Trucker” or “the ICE-ing on the cake”, I was only known by one name, “Frost” or “Frosty the Blowman” or “Frost, Jack Frost."


Anyway we were walking in the now blood lined bowels of St. James when we came across a haunting noise. Terrified, we dove behind the carcass of the mutilated Chick-Fil-A cow that visited the school on the day of the accident. Poor cow never had a chance. I’ve never seen Agent Ice this scared before (one might even say he was frozen with fear, pa doom pishhh).

The weeping shell of my trusted assistant stared coldly into my eyes. “What are we gonna do Frost? What a’ we gonna do!? That sound! It’s them! They’re getting close!”
“Pull your self together man!” I shouted while firmly slapping my fluid-soaked partner.
“Quiet! Stay down!” Footsteps once faded by distance were now slowly becoming more intense.

Hwock…hwock…hwock. They seemed only a few feet away now.
I looked at Ice, took a deep breath, and rose to a crouching position, crossbow gripped tightly in my hands. I counted down under my breath…five…four…three…two…one… I leapt up, wildly swinging the crossbow like it was a glow stick at one of my uncle’s crazy parties.

To my extreme relief, it was not one of the unholy ones at all. Quite the opposite in fact; it was sophomore Josie Thompson. Luckily for her the safety was on. Unluckily for her having the safety on does not reduce the bodily damage done to a petite girl when striking her repeatedly with the broad end of a medieval weapon of war. Oh well, she’ll get over it. There’s no crying in baseball, or professional journalism.

I helped her up but refused to let her use my sham-wow to wipe off the blood. No way in Hades am I getting cooties. That’s when it hit me.

“Wait! Josie!” I shouted, “You must know something about this ordeal! Let us interview you! It will be on the Internet!”

A gleam shined in her eye as she smiled a bloody, toothless grin. If there was one thing Josie loved, it was being on the Internet. I reluctantly gave up my Sham-Wow to help clean her up. No one wants to tune in to see a teenage girl covered in DNA; there’s plenty of other sites for that.

We got Blondie all dolled up and ready for shooting.

“Okay Ice Man, roll that junk.” And Ice Man did what he was told and began rolling that junk. The following is that junk.

Dean: Sophomore, freshman last year. Oh, how the tides of battle change Josie. Where were you when you first heard about the problem?

Dean: The situation, the epidemic that is affecting the school today.

Thompson: You are gonna have to be a little more specific.

Thompson: Um ha-ha, I was at my house talking to my friend Alyssa about it.

Dean: What did Alyssa say?

Dean: what was Alyssa wearing?

Thompson: Alyssa was…she was wearing her… I actually don’t know, I didn’t ask her, it wasn’t important.

Dean: Maybe you should start asking.

Thompson: *quiet threats to me and my family*

Fantastic. We got our first interview. Ice aimed the camera at himself smugly and said, “This was about the problem. Back to you.”

I have no idea who he was going back to, because Ice and I were the only reporters in our documentary.

“How did I do guys?” asked a borderline unconscious Josie.

“She knows too much now man,” Agent Ice said blatantly.

“What? What are you saying Ice old boy?” asked the man that was me.

My pulse began to race, I gently cupped my fingers around the hand grenade in my overalls, flipping the safety to the off position.

“We should have done this years ago Frosty. Years. Ago.”

Matt reached opened his mouth wide and made a fist with his right hand, inserted his rounded fist into his mouth, and his jaw unhinged like he was a water moccasin from Tennessee, before my eyes his entire arm was slowly pulled deep into Ice’s warm stomach glands. Further and further, his coco skinned arm went deep into his body, all the while making a sickening choking noise that sounded like a cross between someone vomiting and a different someone forced to swallow the previously mentioned vomit.

Josie began to scream, she started to back up, slowly at first, and then almost sprinting speed she was fleeing from the disgusting scene. Josie, however, was to caught up in not wanting to be near what ever Matt was doing, and didn’t notice the Chick-Fil-A cow corpse still curled on the floor behind her. She tripped, and with a rather loud popping sound snapped her ankle. Josie fell to the floor in agony.

This isn’t happening I thought, this isn’t happening. My partner abruptly stopped making the spine chilling sounds. I looked over, and his arm would go no further. What ever Matt was looking for in there, he found it.

“Ice! Nooooo!” I screamed, but it was far too late. The monster began removing his arm, which made a terrible slurping sound, this time though he had something in his hand. And I knew what it was. I felt around for my lucky grenade, but I couldn’t bring myself to do it. Matt was my friend. I just couldn’t.

I watched in sheer terror, knowing I have failed Josie. It was around the moment I felt the painful stab of self hatred, that small, innocent, blond Josie looked up at me with big bruised eyes and asked, “Why?”

That’s when Matt finally removed his entire arm, and as his hand was pulled from his enormous maw, I saw the tip of what was going to end this girl’s life. Ice had removed a large, wooden, fighting staff from his stomach and held it, dripping, high above him.

“This is for my ancestors!” screamed Matt as he unleashed all of his might in one violent throw. The staff moved so fast through the air between my partner and Josie it almost seemed to teleport.

In a mere instant, Josie went from totally being alive, to having a giant martial arts pole stabbed through her ribcage, pinning her to wall behind her. Her head hung unresponsively on her shoulders. A dark red stain began to form on her shirt.

“Dang it Matt! Not again. You really need to get your act together.” I held him as he cried into my shoulder, then we packed up the supplies, and began roaming the school again, searching for more interviews.
Posted by Shark Attack