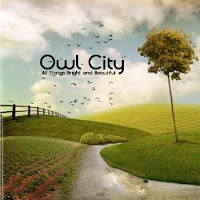 by Josh Royce
After spending nearly a year and a half coming up with ideas and working hard on a new album, musician Adam Young who fronts the musical project Owl City, has put out a wonderful album that can easily be the soundtrack of your summer.


Adam started working on this new album “All Things Bright and Beautiful” shortly after touring for his 2009 release “Ocean Eyes.” Adam has stated that earlier on this year that “Most of the songs so far for the album are very personal. But every song has its on story. Not to say that it’s a concept album, but I think everyone who listens to this album will find their own sort of story behind the lyrics.”

Immediately “All Things Bright and Beautiful” starts off with a song called “The Real World,” a bubbly starter with a message detailing the good and bad in reality. Many songs reflect a very positive message like this one. Such as “Dreams Don’t Turn to Dust,” and “Hospital Flowers,” which try to turn what would be very depressing topics such as losing a loved one more positive.

The two singles he has released so far are “Alligator Sky,” and “Deer in the Headlights.” These are very bouncy and fun songs that are filled with enough synth to keep you humming for weeks. As a matter of fact, the whole album is very catchy. It’s usually one catchy hook after another, but it never gets tiring. Adams clever lyrics keep things fresh, and his voice is a marvelous addition to today’s music.

One huge improvement is Adams voice as a whole. He has found a way to expand his range far beyond what was possible for him on his first two releases, and it works wonders for the newest album. On songs like “Kamikaze,” you can really hear the effort put behind not only how the words are sung, but there placement in the song itself.

Truly, this is one of the best albums so far this year. It’s a perfect mixture of happy beats and meaningful thoughts. If you are a fan of anything Owl City has put out in the past, be sure you check out “All Things Bright and Beautiful.” It’s a serene and wondrous album that really shows what today’s society needs more of, happiness.
Posted by Shark Attack