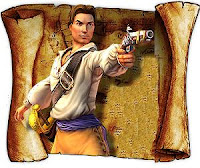 by Chris Maraglio
"Gather 'round matty's thar be a story to be told. Tiz be a story 'bout adventure, action, romance on the high seas. Our hero be only 18 when he first left port but after that the world was his."


Sid Meiers Pirates for Xbox definitly captures the pirate experience and put it in the the control of the player. Sid Meier is truely a pioneer of economical/action games, the reason for this being is just the sheer amount of things to be accomplished from the moment you start out as a young priviteer aiming to make a name for himself along with with slight family story. The game starts out with you as a young boy around the age of 8, you and your entire family is celebrateing a tresure fleet headed in to port in your name.

But during the celebration is cut short by a surprise visit from the barron of the city (basicly the rent collector), the fleet that had all your riches on it was lost at sea and your family has nothing to show for it. The barron then imprisons your family but before you are heared onto the jail wagon you escape and vowe to revenge.

Ten years later you are a strapping young lad finally ready to set out and find your family members from the evil baron. The way this satrts out is you walk into a tavern and you choose what time frame you want to be in(different decades effect what kind of ships you see on the sea and whats happening with the world around you), what difficulty you want to play at, what skill you can choose, and who you sail for in the beginning.

When choosing a skill you can pick from an array of skills that can help you on your adventure such as fencing, gunnary, navigation, and even romance, plus many more. There are 4 factions that you can sail for, the English, the French, the Spanish, and the Dutch. Each one of these factions can either be at war or peace with each other and this changes progressively as you play. Your actions have a big effect on how each factions react to you. For example, you sink a spanish ship and plunder the gold on it, while the spanish will be mad at you you may get a promtion from the enlish or whoever is at war with the Spanish.

These promotions help when recruiting people for your crew, getting better prices on food or even free ship repairs. An easy way or getting these promotions are ransacking city and claiming it for the faction you want to get in good with. These citys can also change at anytime due to invasion forces sent by the that country, weather or not the attack is sucsessful is based on the city itself. But this game is not a pirates game without pirates right? Sid Meiers Pirates has an entire list of famous notorious pirates that can be hunted down and taken of the world forever. Mix all of these event together and you have a MASSIVE game with hours and hours of game play and basicly an infinite amount of replayablility.
Posted by Shark Attack