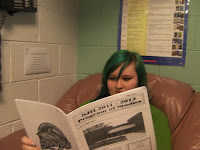 by Jake Wentz
St. James is gearing up for the end of the year. Senior trip is approaching, and senior Sharks prepare for real lives outside of the hallowed halls they’ve walked for the last four years. Prom was last weekend, report cards are in the works, and freshman are glad they’ve made it this far. For next year, there are some positive changes that students can look forward to.


The program of studies for the 2011-2012 year has been released, and seminars were held earlier this week to give orientation for all of the returning Sharks. The student body as a whole seemed excited, and our guidance counselors are in agreement in support of the higher standard approaching.

New classes are being offered, and the process of choosing your courses will be different and more helpful to students.

Along with Mrs. Pickett, many others in the faculty are endorsing the new focus for next year. They want to help students make the choice to take tougher courses. The AP (Advanced Placement) program is the forefront of this, and is strongly encouraged for any St. James student capable of the classes. If someone doesn't believe they make the cut for that, Honors is also a supported decision, anything to help the graduating GPA of the Shark student body as a whole.

New classes being offered next year include a newly revised Mythology and Film Literacy, a Music Theory AP, English Language and Composition AP, and an AP Calculus AB/BC. Also it will be noted that some classes that have been in the same academic area will go on a rotation system where they’ll be offered one year and then not the next, and vice-versa.

The P.A.C.E. program is also available for those who already want to get college credit. It has the AP classes for its core, and are taught over at Horry Georgetown Technical College.

The following weeks will be used to set up the schedules of the returning Sharks.
Posted by Shark Attack