iPhones return to change the world 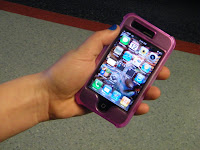 by Jake Wentz
iPhone: one name, 14 million products sold, the world’s latest operating system. It’s the toy that changed everything, and iPhone is now a household name recognized by millions across the globe. Its release was the biggest advertised event for an electronic device in history, and now Apple is here to change everything again.


As of Tuesday, announcements are in that Verizon wireless will now carry the iPhone4. This is being called the next step for the smart phone, and it really could be. Verizon is arguably the leader in wireless calling. The company is extremely successful, especially considering it has only been completely in the market for 10 years. Verizon’s profits and number of users rival any other larger telecommunications company.

Television ads will be littered with news of this company joining the iPhone revolution. So far, we know that current Verizon contract holders can preorder their very own iPhone4 from Verizon starting Feb. 3. For everyone switching to Verizon, iPhone4 will be launched to the public on Feb. 10. It has only been a few days since the news, and stock for both Verizon and Apple are up.

AT&T, on the other hand, has not received any defense for the job it has already been doing. The news of the switch has brought many customers forward about the terrible service AT&T has provided. Reports of dropped calls and trouble in metropolitan areas such as New York are all over the web. People of the big Apple go as far as to help Jon Stewart make a segment highlighting the failures of AT&T.

All the news has been welcomed mostly with acclaim from people who came up with the idea of VZ meeting Apple. Apple COO (Chief Operating Officer) Tim Cook said, “I can’t tell you the number of the times that I’ve been asked and my collogues have been asked, over this incredible success run of iPhone, that the most popular question has been, when will the iPhone work on the Verizon network?”

Although most talk is of excitement, there are already questions as to what exactly will happen. The questions that are flying through press conferences and microelectronic debates everywhere.

Consumers are wondering if their Verizon bills going to be higher because of the added incentive. Correspondents say yes; Kelli B. Grant and Jonnelle Marte of The Wall Street Journal have a report out explaining that old discounts will end unless someone was to renew their contract before Jan. 16. Certain rebates are set to discontinue. This is all in place to account for the cheaper pricing of their iPhone4; which start with 16 gigabytes at $199.99 with a two year contract.

Next to address, Verizon had to decide what operating software to run on the iPhones. After much back and forth idea pitching, they came to the obvious choice, keeping it exactly the same! The VZ iPhone will run with the over 300,000 Apps, the Apple store, iTunes, and is programmed with the iOS 4.2.1. All of that combined makes this iPhone simply the next upgrade, but on Verizon network.

Others ask why this is just now taking place. Verizon and Apple just seem like a good mix; why haven’t they teamed up before? It could have worked out any time previous to this, but it is just now here. That is an answer not available at this time, and CEOs of Verizon are being pestered about it, so that information may come in a few days.

Finally, all that is left is the waiting as excitement builds for many tech-lovers who count the days until release. Still certain queries are being raised, such as is the VZ iPhone all hype? There is no way now to tell, other than wait and listen.
Posted by Shark Attack