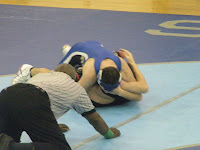 Teams from states like South Carolina, North Carolina, Tennessee Georgia, and Virginia all came to flex their muscles at the tournament. A total of 24 teams made it to the tournament that started Friday night and continued all day Saturday.

This was really big for the team considering they were facing defending state champions and national ranked wrestlers. The team has worked so hard this season and is off to a wonderful start. “I think the team is working really hard to show that they are willing to repeat as region champions,” said Junior Jack Younan.

This Saturday the Sharks will hold their own tournament called the Shark Duals. Teams from all over Horry County will be coming.

St. James is currently 4-1 as a team excluding tournaments. They will start regional matches on January 5th against Myrtle Beach at home. Come out on Saturday to see how exciting a wrestling match really can be. The team would love to have a huge crowd there to help them defend their mat.
Posted by Shark Attack