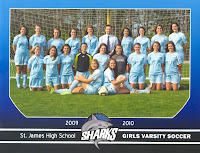 By John DelBianco
The Lady Sharks varsity soccer team battled against the Myrtle Beach Seahawks at home on Thursday night. Last time the teams played, the Seahawks won 5-1 and took the lead in the region. On Thursday, the Sharks exacted revenge with a 3-1 victory.

Without its seniors, the team got a picture of what it will be like next season. The two seniors, Ana Sigmon and Emily Fultineer, were with the senior class on a trip to Disney World.

The game started off with a goal by Myrtle Beach about 15 minutes into the game. Then with about 10 minutes left in the first half, St. James sophomore Sara Breeden took a corner kick that was kicked into the Seahawks’ goal by sophomore Jessi Campos. It was 1-1 at the end of the first half.

Starting the second half, the Sharks continued to play with heart. About 20 minutes into the second half, the Sharks scored on a goal by freshmen Alexis Sansook. With a 2-1 lead, the momentum stayed with the Lady Sharks throughout the rest of the game. With 16 minutes left, the girls struck again when sophomore Haley Lundquist kicked the ball toward the goalie who deflected the ball, which still went over her head and into the goal for the Sharks’ third score of the game.

The rest of the second half was played with unstoppable defense lead by sophomores Campos, Sarina Way, Julianna Natali and Caitlin Kirby.

When the referee blew the whistle to signal the end of the game, the girls mobbed each other at midfield in celebration of their memorable win.

“Nearing the end of the season and heading into the playoffs I believe that our team is in a very comfortable position,” said Natali. “We are playing great soccer right now, and we need to have momentum going into the postseason. I believe that if we continue to play the way we have been playing, we can go farther that any other St. James girls’ varsity team has ever gone.”

No St. James girls’ soccer team had beaten Myrtle Beach before Thursday night. The girls could not be more ecstatic as they talked with Coach Lee Cannon about how they played.

“It’s amazing! This was the first game that I feel like we actually played as a team,” said Way. “It made us feel so much better knowing that the varsity soccer team has never beaten Myrtle Beach. It feels great to be in second place in our region! I am so proud of our team.”
Posted by Shark Attack